Since its founding in 1988, the work of the Des mots d’la dynamite company has inscribed itself in the contemporary art and interdisciplinary movements. By privileging intimate encounters, often with purposely artisanal methods, it advocates for the decompartmentalization of disciplines, and this, for all audiences. The leitmotiv of the company has remained unchanged since its founding: Philosophik + Politik = Poétik. 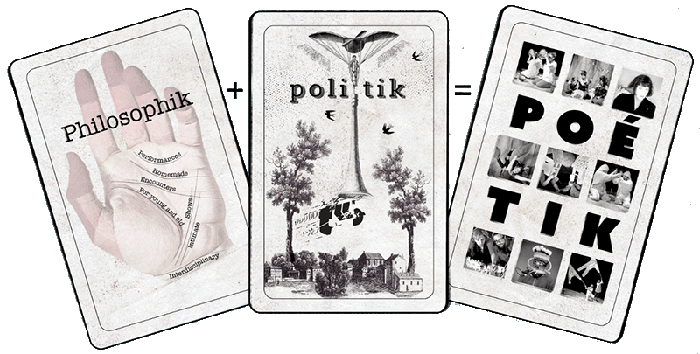 Having disseminated numerous works at performance venues, museums, artist centres, festivals and events, the company has shown productions in Quebec, Canada, Europe, the United States and Cuba. Albums, which came out in 2000, 2004 and 2007 hold the memory of three interdisciplinary experiences, Les 4 ronds sont allumés [The 4 burners are on], Les Écoutilles [The Hatches] and Les Chantillons [Songlets. In 2008, a book-album published by Planète rebelle editions, entitled: Les Temps qui courent / vingt ans de paroles tenues [Times are Running / twenty years of held promises], tracks 20 years of art making by the company.

In 2008, the company decided to focus on a relatively unexplored area of the Canadian performing arts: the very young audience (18 months to 5 years old). Since then, three works have emerged for this particular age group: Scenes from a Tree (2009), Where I live (2013) and Slow Magic (2016). The three productions have moved around Canada, the United States and Europe. In a recurring fashion, the company has integrated a cycle of cultural mediation with the early childhood community to its creative process, in order to support and enrich the different stages of the creative development of its shows.

- Advocate the de-compartmentalization of the performing arts;
- Explore the frontiers between different media;
- Question the stakes of representation and the practices of “make-believe”;
- Allow for the emergence of new forms of writing or reading within the performing arts.